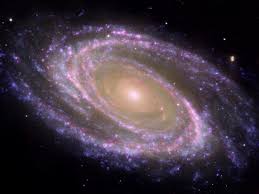 On his way to Earth, Chico paused to record our galaxy